In Matthew 5:27-30, Jesus gave his timeless teaching on how sin works in our life, using the example of adultery and lust. To refresh your memory from yesterday’s sermon, here are Jesus’ words once more:

Even though Jesus’ uses an example of hyperbole or exaggeration, these words still apply in a deeply practical way. Don’t let anything cause you to sin… It is better for you to throw it away than to suffer a terrible fate!

But what does Jesus exactly mean when he says we should avoid sin lest “your whole body to go into hell?” 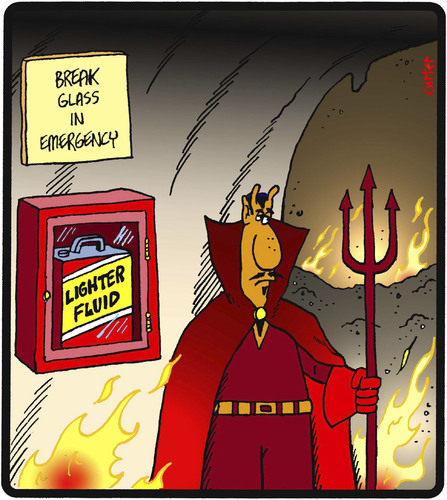 If you ask me, I believe that Christians have a somewhat rocky history with the idea of hell. Our beliefs about it mainly come from non-biblical sources like Dante’s Inferno, horror movies, or even cartoons. For instance, we usually imagine Satan to be a guy in a red leotard with pointy horns!

And in the religious world, some pastors might use the idea of hell to scare people into heaven. Other Christians might even threaten others with eternal damnation, treating God like a vindictive, unloving being. People often warp the very purpose of Christianity to mean a “get out of jail free” card. Christian tragically becomes an exercise of avoid hell, rather than a call to love Jesus Christ for his sake.

But when Jesus talked about hell in this passage, he had a radically different way of describing it that a scary movie. The specific word he used was Gehenna. Jesus used this word as a reference of an actual physical place near the city of Jerusalem during ancient times:

If you happen to have a set of maps included in your bible, Gehenna might actually be included in a map of ancient Jerusalem (either that term, or the “Valley of Hinnom”).

Gehenna was an area outside of the city walls and was most likely a garbage dump during Jesus’ day. Some historians believe this was a place where ancient kings in the Old Testament would sacrifice children. While the exact history is uncertain, when Jesus pointed to Gehenna, the point was that it was a place outside the safety of the city. It was away from God’s protection and guidance. Hell (or Gehenna) meant a life outside of God’s provision and even a place of unimaginable evil and decay.

So Jesus’ picture of hell in Matthew 5 is rather illuminating. Hell as a concept of what happens after we die is another blog post for another time, but Jesus’ words teach us a lot about life here and now. To be “thrown into hell” means living a life apart from God. When we continue in sin, we place ourselves outside of God’s presence. We literally pack our bags and settle in a place of utter separation, hopelessness, and evil. We tragically make our home in a metaphorical garbage dump.

The good news of Jesus’ provocative teaching is that there is a pathway forward. We of course have the option to cling to our sinfulness… but we also have the chance to flee from unrighteousness. By throwing away that which causes us to sin, we can get closer to Christ.