There’s an interesting detail on our bible passage from yesterday’s sermon. In many bibles, translators often place a footnote after John 8:1-11. Here’s how the NIV folks put it:

So what’s up with the story of Jesus and the woman caught in adultery? Does it actually belong in the bible? Did this story really happen back then?

This footnote may sound alarming, but we must remember that it was often a challenging, lengthy process to form scripture itself. This painful fact is true in part because ancient texts often did not last a long time. Papyrus can deteriorate over time. Likewise, “original” copies of scripture are basically nonexistent. People back then, knowing the full effects of wear and tear, would often copy letters in order to preserve them. Most letter fragments are exact matches, but there are sometimes variations. The end result is that there are seemingly countless bits and pieces of ancient biblical fragments. By my rough estimate, there are about 25,000 partial fragments and complete manuscripts of the New Testament. That’s a lot to sort through!

(As a side note, this is why the discovery of the Dead Sea Scrolls was so revolutionary–archaeologists and researchers were able to identify a lot of really old texts in phenomenal condition!)

Throw that reality in with the fact that not every piece of papyrus was a complete set of a biblical book. In fact, there were many gospels and letters floating around for many years! One of the earliest tasks of the church councils beginning in 325AD was to sort through all the documents circulating in the ancient world–for gospels, they prayerfully discerned that Matthew, Mark, Luke, and John will be included.

To see what I mean about bits and pieces of fragments, consider what is known as the Rylands Library Papyrus P52 (also known as the St. John’s Fragment). This small, tattered piece is arguably the oldest known item of the New Testament: 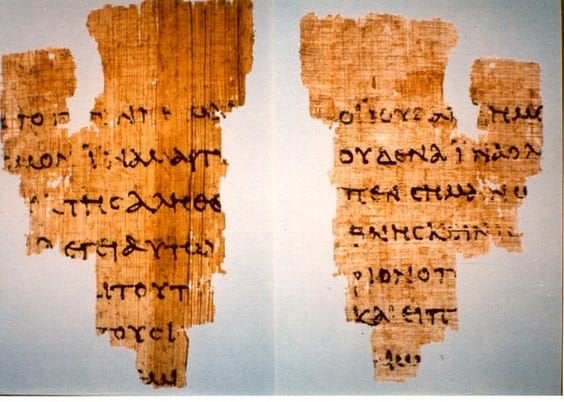 P52 is dated to around 125-175AD. Needless to say, the analysis of handwriting, grammar, and age of ancient Greek is way above my pay grade or educational level!

The earliest “complete” manuscript of a biblical book is John’s gospel from about the year 200. And the oldest complete set of all New Testament books (all under one binding) date to around 350 or so.

This brings us back to the issue of John 8. About 4% of extremely old Greek sources (fragments like the P52 one above), happen to include the story on Jesus and the adulteress. Other do not. Some even place the story in Luke’s gospel or other chapters of John.

Some Christians might be alarmed that either (1) this story is absent in 96% of the oldest writings, or (2) there is such a length “gap” of time between Jesus’s life to later in history when we have a copy of the story. Instead of worrying about the issue, here are a few thoughts on this dilemma…

Regardless of “authenticity” this passage does not contradict the message of Jesus. We read extensive examples of Jesus encouraging forgiveness and mercy, all while preaching against judgment. In my mind, the John 8 theme fits right in with who Jesus truly was. It does not nullify any broad theological idea presented in the New Testament.

Extra-biblical sources do reference the woman caught in adultery. “Outside” sources from the time period do allude to this story taking place. St. Leo, an early pope, used this story as an example in a sermon. The same also goes for St. Augustine’s writings, too. Eusebuis, an early church historian, also referenced the woman and Jesus. Many people in the 300-400s were convinced this story was authentic. Even though it might be missing from early fragments and manuscripts, the story itself was still widely accepted around that time period.

If you seek out skepticism, you’ll find plenty of reasons to doubt. With so many fragments and copies (and a complicated history to boot!), it can be easy to doubt the bible’s formation. However, we do need faith in our heart to trust God will use texts like this to shape our life. At least in my opinion, there’s something truly incredible about this book!

There’s more to faith than obsessing over individual verses. American Christians often get hung up on issues like scriptural authority and proving aspects of the bible. How can we know that 100% of our bible is God-inspired? The broader point of Christianity, however, is simply following Jesus Christ. The bible is indeed a special book, but we must never forget that Christ is our “end goal.” Scripture points us in his direction through that unique revelation. To sum it all up, the story of Jesus and this woman reveals the loving heart of God.

One thought on “The Challenges of Bible Formation”