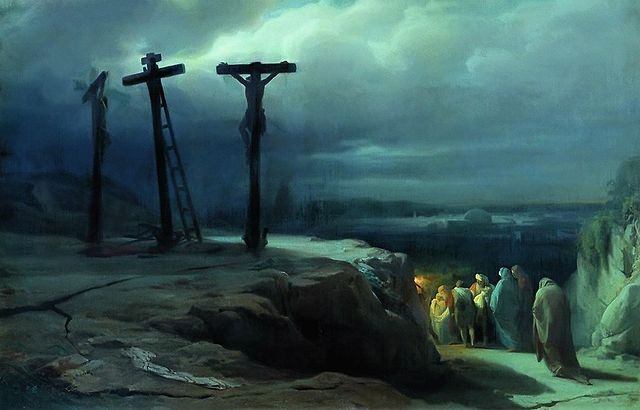 What exactly happened between the world and God at the moment of Jesus’ death? In the Christian tradition, there are various ways people have answered this question. The term for this branch of theology is called atonement theology.

I heard it once said that we all know that atonement happens–God saves us… but we aren’t exactly sure on the “how” God does this exactly!

As with many theological issues, Christians often disagree with one another, especially with questions like this one. Likewise, there are about three major approaches to answer the bolded question raised above. Depending on how you understand atonement, there may be even as many as ten theories! But for the sake of simplicity, we’ll explore the three broadest ones.

Keep in mind that people find justifications for all three in the scriptures and church tradition. And each clearly have weaknesses. Here’s a (very) brief overview of atonement theories… This atonement theology argues that humanity was held captive by the forces of evil. Satan had “captured” us, so to speak, ever since the fall of humanity with Adam and Eve. In a sense, we were held hostage and doomed to death. Jesus paid some sort of price for us, freeing us from Satan’s grasp. The cross and the empty tomb means God won against evil, thus providing salvation for all creation.

Jesus offered some support for this view in Mark 10:45- “For even the Son of Man did not come to be served, but to serve, and to give his life as a ransom for many.” This was also very popular view in the early church, with phrasing such as Jesus “descended into hell” included in some versions of the Apostles’ Creed (the implication meaning he is rescued the dead from Satan). Also, as I’ve written on before, paintings like the Anastasis depict Christ trampling Satan and destroying the locks on the gates of hell, rescuing people from death:

Critics of the ransom theory are skeptical about the idea of ransom, as if God owed something to Satan. Other may argue that Satan does not “own” anything or anyone, and that God alone is all-powerful. If someone also believes God desires to punish others, chances are they wouldn’t fall into this category, too. This view on atonement theology is also sometimes called penal substitution, implying a focus on crime and punishment. The view presupposes that God was to punish humanity, but Jesus “stepped in” and took our place. Likewise, God punished Jesus on the cross for our sin. We all stand before God with countless faults due to our brokenness. God demands we pay for this sin. Instead of us paying the price, Jesus volunteered in our place. A substitutionary theorist would argue that this simply fits in with an interpretation of Old Testament regulations on sacrifice–blood must be shed in order to appease God’s wrath. Because sacrifices of old were imperfect, God had to offer himself to satisfy this need for justice.

There aren’t many gospel scriptures supporting this view. Instead, proponents look to passages like Isaiah 53 about a prophesied “suffering servant” bearing the sins of others.

There are several noteworthy problems with penal substitution. For starters, many argue that it makes God out to be bloodthirsty and vengeful, rather than radically gracious. God seems eerily similar to pagan gods requiring tribute. Another criticism is that the substitution view is rather self-centered. We are the ones who enjoy salvation, and Jesus is only a means to this end (what about Jesus’ life and moral example?). Furthermore, some Christians argue that substitution theology has contributed to abuse throughout history, where people assume physical violence is an acceptable act against a child or spouse.

This is another viewpoint on atonement, but really focuses on Jesus’ moral actions throughout his life and ministry. It asserts that Jesus provided us the perfect moral example of how to live. As Christians, our duty is to clearly follow in the footsteps of Jesus. Jesus died in order to provide humanity an example of what perfect love looks like. Instead of taking up arms against his enemies, Jesus asked God to forgive them.

Moral example proponents argue that this also applies to Jesus’ obedience as highlighted in Philippians 2:8- “And being found in appearance as a man, he humbled himself by becoming obedient to death—even death on a cross!”

Critics of the moral theory argue that this atonement theology does not adequately address our sinful condition. If Jesus’ purpose on the cross was to just give us a good example, why do other parts of scripture explicitly speak of ransom, atonement, salvation, and so forth?

As you probably realize, there are many pro’s and con’s to each theory. Personally, I’m a huge fan of the ransom and moral example theories. I think the substitutionary one is too self-centered and neglects the broader purpose of Jesus’ ministry.

Nevertheless, it is still important to consider what atonement means. We might be assured in God’s redemption of creation, but we are likely less sure of the specific “how” of the matter!